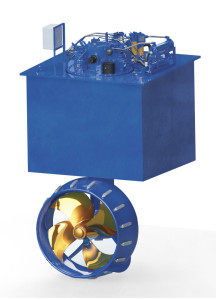 Safer, faster, using less fuel
Due to the greatly improved maneuverability with Z-drives, costly collisions
can be avoided. There is no longer any need to slow down in turns and bends in
the river. Trip times are reduced and require a lot less fuel. A study conducted
by The Shearer Group, Inc. showed an average of 28% fuel savings and 11%
trip time savings during a set of controlled experiments with unit tows when
using Z-Drives instead of conventional shafts and rudders. 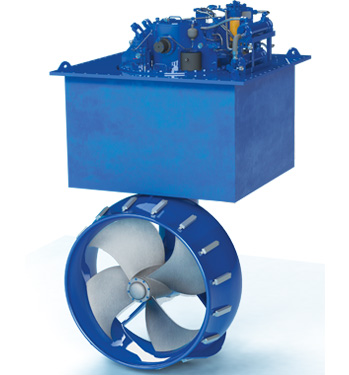 When the big tows of up to 40 195 x 35-foot barges come down river, it is the fleeting tugs job to take selected barges off the tow and park them in the riverside fleet. A fleet is a string of barges moored along the river for which smaller towboats provide switching and shifting duties. Later they will take the barges to nearby docks or ships moored in mid-stream for offloading. This is a job that requires a power and agility in the towboat that moves these barges around. It is a high demand job in which time and timing are all important.

Due to these clear benefits Thrustmaster has a growing reference list of inland towboat companies enjoying operational advantages and tremendous fuel savings courtesy of a robust product lineup of Z-Drive thruster solutions.

Towboats can get equivalent performance in a smaller power output that allows tug fleets to use smaller engines. This makes the towboats lighter and with less weight penalty they are more fuel efficient. A 1,400 hp pushboat (with the Z-Drive) can perform the same as a conventionally outfitted boat with 2,000 hp– same barges, same loads – as each thruster has full power at 360 degrees. With traditional systems you only have full power in one direction.

Thrustmaster offers flexible engineering and design standards with every product and is particularly adept at looking at the project as a whole to design with the naval architect, with the shipyard and ultimately with the owner what is agreed to be an optimal solution. This benefits retro-fits of existing vessels with new drives taking in consideration the well height, gear angle along with the options offered such as the mechanical fuse and engine mounted disengaging clutch. 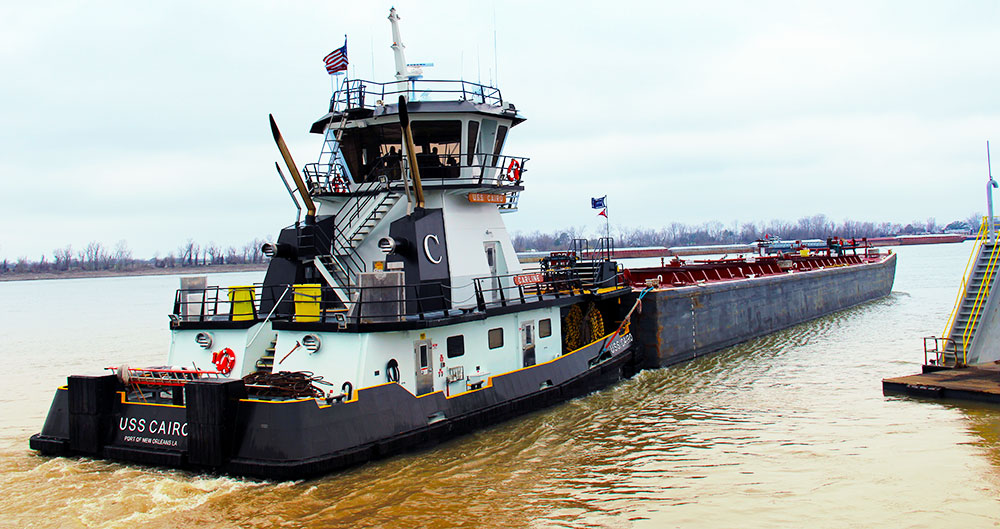 Send a Sales Inquiry to Thrustmaster