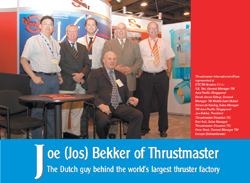 In conjunction with two trade shows these past few months (one in Scotland and the other in Rotterdam) Holland Shipbuilding Magazine featured Thrustmaster in several well written articles. Special focus was given on Dutch native Joe (Jos) Bekker, President of the company and the new factory.

Setting up the articles Thrustmaster Europe, B.V.’s manager, Hans Hoek took special pride in the fact that Joe hails from Holland. Hans played a pivotal role in setting up the European shows which helped increase Thrustmaster’s visibility to the North Sea market.

With over 800 exhibitors and the Prime Minister of the Netherlands, Jan Peter Balkenende appearing at the AHOY ROTTERDAM 09 show, it was still no surprise that Joe Bekker was the only Thruster Manufacturer to be interviewed for the shows hallmark video that played to arriving visitors. His optimism shows in this interview with film makers as the Rotterdam show proved to be one of the busiest in years.