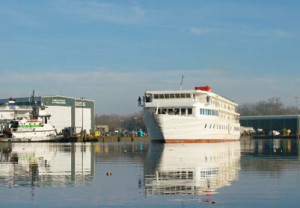 The brand new American Cruise Lines ship, Independence, being built at Chesapeake Shipbuilding, was taken on its first underway trials yesterday. This important milestone trial occurred three months ahead of schedule. Maneuvering and equipment tests were performed successfully while the ship was underway in the Wicomico River.

American Cruise Lines will run the Independence on 7-14 night cruises beginning on June 12, 2009 with 102 passengers on the East Coast. The ship has a number of important differences from other ships that Chesapeake has built for American Cruise Lines, including a wider beam and active wing stabilizers. The wider beam will allow for larger staterooms, public spaces and private balconies.