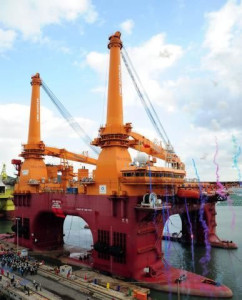 Operational regions include West Africa, Brazil, Gulf of Mexico and the North Sea.

The Brazil bound semisubmersible drilling rig was built at the Yanti CIMC Raffles shipyard and is due to work for Petrobras offshore drilling.

CIMC Raffles said it is the first asymmetric semisubmersible unit without bracing in the world. This reduces the towing resistance and dynamic positioning load, improving self propelled transit speed from an average 8 knots to more than 12 knots.

The vessel has two 1800-ton offshore mast cranes, which can perform tandem lifting, and it can withstand more than 22m wave height, says CIMC. Its specification means it can work in West Africa, Brazil, Gulf of Mexico and the North Sea, added CIMC.