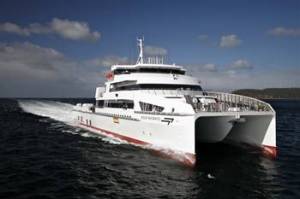 Sizes range from 250 to 10,750 HP (185kW to 8.0MW) with a wide selection of reduction ratios and propeller/nozzle diameters to suit the application requirements.  They are normally supplied complete with electric motors and variable frequency drives, but they can also be made to fit flange and shaft end of a customer supplied or shipyard supplied electric motor.

The motor travels up and down with the thruster, so the drive line is never disconnected.

This is the first vessel that Australian Shipbuilder Incat Tasmania has purpose built for the oil and gas industry. When sea trials are completed the boat will depart later this month to Baku, Azerbaijan.

During construction over the past year the fast crew boat has been referred to simply as Incat hull 074 but is now bearing the name Muslim Magomayev in honor of Azerbaijan’s famous opera and popular music singer Muslim Magomayev who died in 2008. Magomayev was a renowned entertainer not just in Azerbaijan but all the former Soviet states, often dubbed as their answer to Sinatra.

This first of type DP2 class 70-meter vessel is being delivered to Caspian Marine Services to operate fast crew transfers for 150 offshore workers to multiple installations in the Caspian Sea.  The high speed of the 70-meter FCB will allow operational efficiency over helicopter transfer for both passengers and cargo, whilst the semi-SWATH hull design, along with active ride control, will reduce stress on passengers so they arrive at an oil platform relaxed and fit to work.

Muslim Magomayev has approx. 200 metric tons deadweight and is capable of carrying 150 passengers and 14 crew, along with 130 metric tons of deck cargo, in up to 40 knot wind and seas of 3 meters significant wave height.  The 275-square-meter cargo deck will allow the vessel to complete cargo hot shots over a range of 400 nautical miles at speeds of up to 35 knots.

Passengers are accommodated on both the main and mid-deck, the main deck also housing two VIP rooms, storage areas and an equipped workshop, while crew cabins and galley are on the mid-deck.

The vessel’s 16-meter beam is far narrower than is usual for an Incat catamaran but determined by the width of the Volga-Don Canal that it must transit on its delivery from Hobart, Tasmania to Baku in Azerbaijan.

Speaking at the ceremony the Managing Director of Caspian Marine Services, ZamigIsmayilov said, “We had heard a lot about the quality of the Incat ships before we came to Tasmania, and now that we have seen the finished ship we are very pleased that we decided on Incat, the Muslim Magomayev they have built for us will be the best vessel of its type in the Caspian Sea.”

“Everyone in the industry knows that shipbuilders don’t deliver on time, but Incat has and CMS are very happy that we are taking delivery of our boat not just on time, but looking and performing very well.  I was surprised on the sea trial that we were moving and I hadn’t even heard the engines start so not only will it carry all that is required, it is fast, quiet and comfortable.”

Muslim Magomayev will be the world’s largest high speed crew catamaran vessel operating in the global oil and gas industry, and Incat Chairman Robert Clifford said, “We believe this fast crew boat will generate a great deal of interest in the global oil and gas industry.  It will pave the way for future orders for similar vessels as operators can take up an alternate to the very expensive option of helo transfers.”

The power for Incat hull 074 is supplied by four 2,880kW engines each powering four waterjets and four Thrustmaster Retractable Thrusters Model TH300MLR.  Anticipated design speed was 36 knots with an efficient service speed of 30 knots at full load and 90% MCR, sea trials have not yet been completed, but on her first day on the water the vessel comfortably achieved 38.7 knots lightship.

The ship has been constructed of lightweight marine grade aluminum over the past year at Incat Tasmania’s Derwent Park Hobart shipyard, with concept design by Incat Crowther of Sydney and production engineering by Revolution Design Pty Ltd (Incat Tasmania’s design team).  It is the first craft Incat has built to the DNV Clean Design notation, giving it a “Green Passport”.

The vessel’s electronic installations are extensive with an expansive wheelhouse to accommodate the range of high tech systems required for the dynamic positioning.

Crew transfer is completed primarily by the Amplemann system, a stabilized access platform, providing a stable deck and gangway to safely transfer between the offshore platform and the vessel. The access platform compensates for the vessel’s motion by using six hydraulic cylinders. 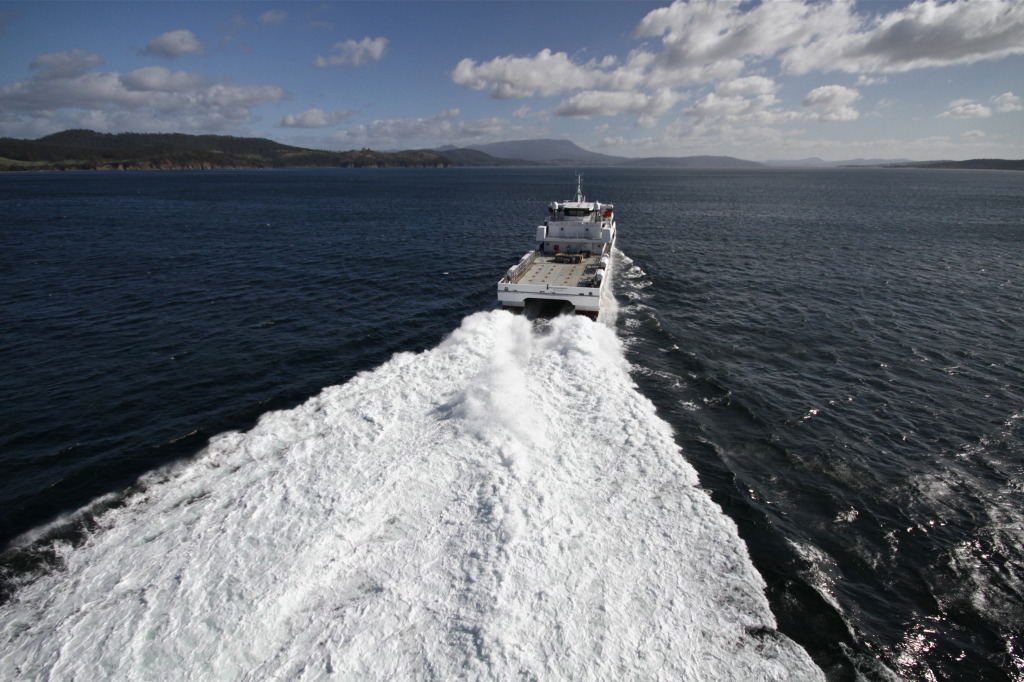 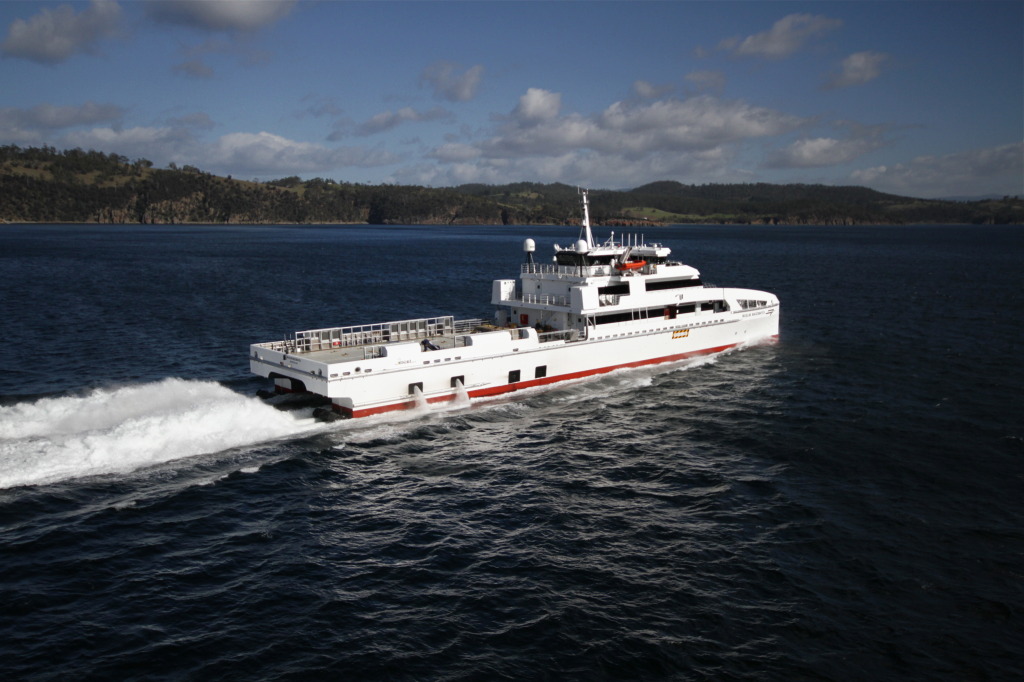 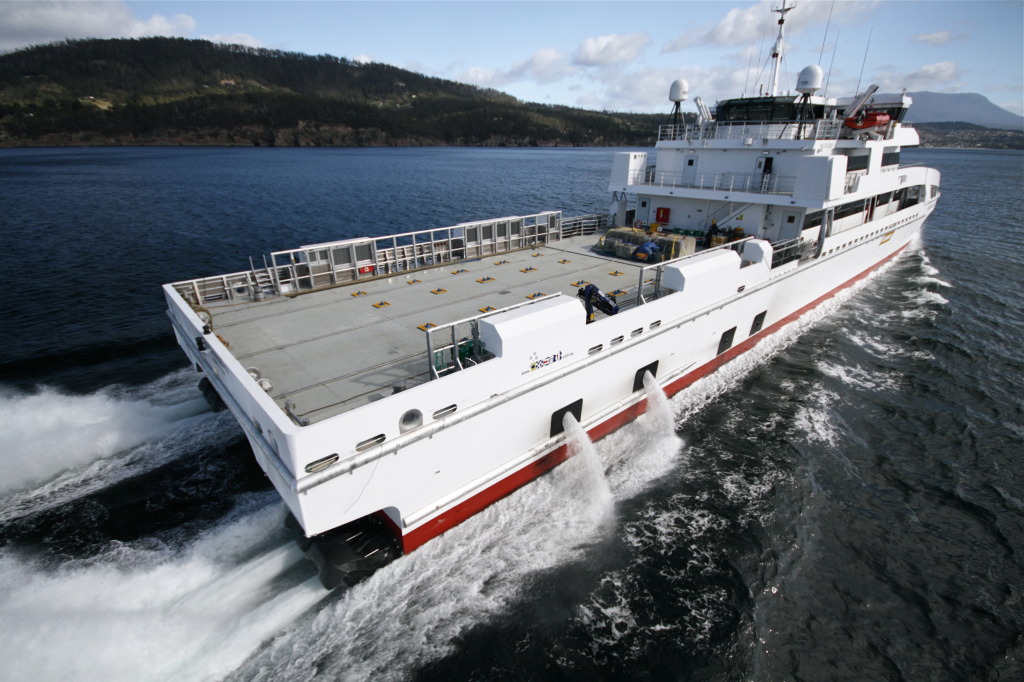 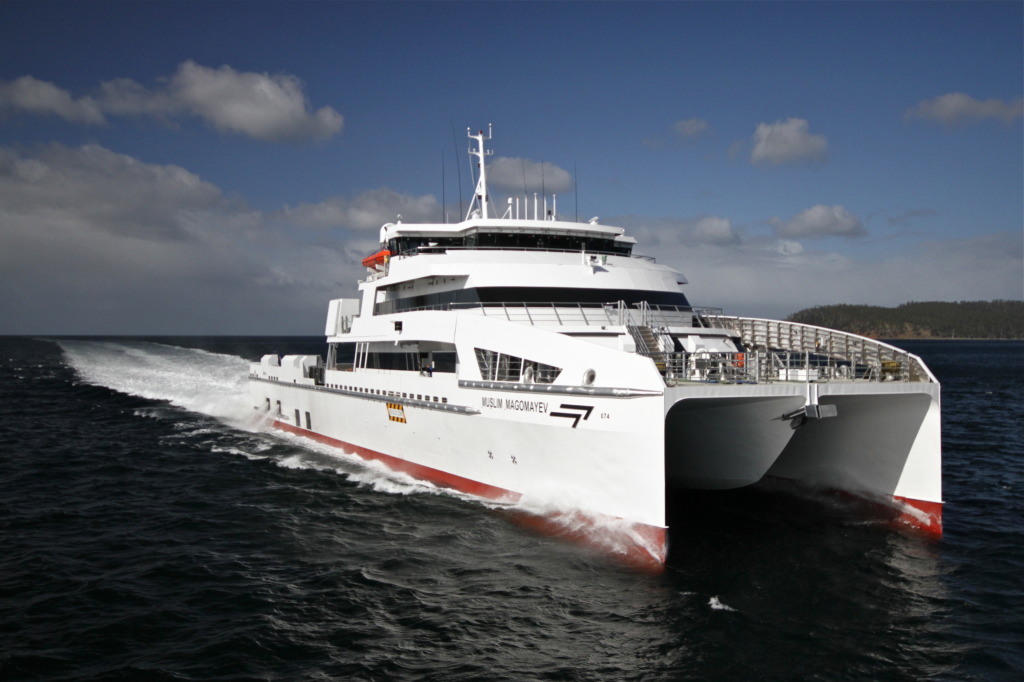