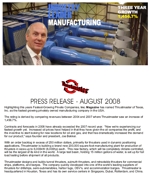 “How He Did It” feature in Inc.com Magazine.

Contracts and forecasts in 2008 have already exceeded the 2007 record year. “Now we’re experiencing our fastest growth yet. Increased oil prices have helped in that they have given the oil companies the profit, and the incentive to start looking for new locations for oil and gas, and that has dramatically increased the demand for our product,” says founder and president, Joe Bekker.

With an order backlog in excess of 250 million dollars, primarily for thrusters used in dynamic positioning applications, Thrustmaster is building a brand new 200,000 square foot manufacturing plant for production of thrusters in sizes up to 6,000kW (8,000hp) each. This new factory, which will be completely climate controlled, will be the largest of its kind in the world. A large test basin, holding 15 million gallons of water, is set up for full load testing before shipment of all products.

Thrustmaster designs and builds tunnel thrusters, azimuth thrusters, and retractable thrusters for commercial ships, platforms, and barges. The company quickly developed into one of the world’s leading suppliers of thrusters for drill ships, semi-submersibles, harbor tugs, OSV’s, and accommodation barges. Thrustmaster is headquartered in Houston, Texas and has its own service centers in Singapore, Dubai, Rotterdam, and China.

This site uses Akismet to reduce spam. Learn how your comment data is processed.