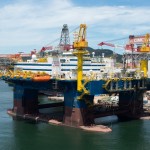 OOS International is filled with pride to introduce a new semi-submersible accommodation vessel (SSAV), the OOS Tiradentes (previously named CR-600), destined to enter the OOS International fleet. This vessel, named after a famous independence hero in Brazil, will departure from Yantai, China to Brazil in February 2018 and be stationed in Brazil under contract with […]