Thrustmaster of Texas, Inc. The Coanda effect is the phenomenon in which a jet flow attaches itself to a nearby surface and remains attached even when the surface curves away from the initial jet direction. The phenomenon derives its name from a Romanian born aeronautical engineer – Henri Coanda. In free surroundings, a jet of fluid entrains and mixes with its surroundings as it flows away from a nozzle. 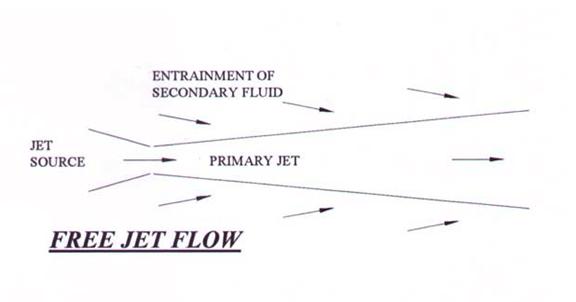 When a surface is brought close to the jet, it restricts the entrainment in that region. As flow accelerates to try balance the momentum transfer, a pressure difference across the jet results and the jet is deflected closer to the surface – eventually attaching to it.

JET ATTACHES TO ADJACENT HULL SURFACE
Even if the surface is curved away from the initial direction, the jet tends to remain attached. This effect can be used to change the jet direction. In doing so, the rate at which the jet mixes is often significantly increased compared with that of an equivalent free jet. The jet stream exiting the nozzle of a thruster is affected by the Coanda effect, since the bottom of the hull is an adjacent flat surface. When a conventional azimuth thruster on a semi-submersible vessel is thrusting in the athwart ship direction, toward the opposing pontoon, the jet stream will first attach itself to the bottom of the pontoon where the thruster is installed. It will then follow the radius at the edge of the pontoon, turning the jet stream in an upward direction. It will then cross the distance toward the opposing pontoon where it hits the side of that pontoon.

JET ATTACHES TO THE BOTTOM OF PONTOON, TURNS UPWARD AT RADIUS ON PONTOON CORNER AND HITS THE OPPOSING PONTOON
This results in two significant thrust losses: 1. Friction of the jet stream where it flows along the bottom plating of the pontoon at high velocity. 2. Pressure of the jet stream exerted on the opposing pontoon. Modeling using CFD analysis (Computational Fluid Dynamics) and in model test basins have shown that these losses can be as high as 46% of the total net thrust produced by the propeller and nozzle. The jet stream exiting the nozzle is diverging at a total included angle of approximately 13 degrees. Through CFD analysis, Thrustmaster has discovered that when the jet stream is directed at an angle of not less than seven degrees away from the hull plating, it will no longer tend to attach itself to the hull plating. The jet will completely separate itself from the hull and will continue to move away from it. Based on this knowledge, Thrustmaster developed azimuth thrusters with a 7 degree downward thrust angle. These thrusters use 97 degree gears instead of the conventional 90 degree gears. This eliminates the thrust losses described above. 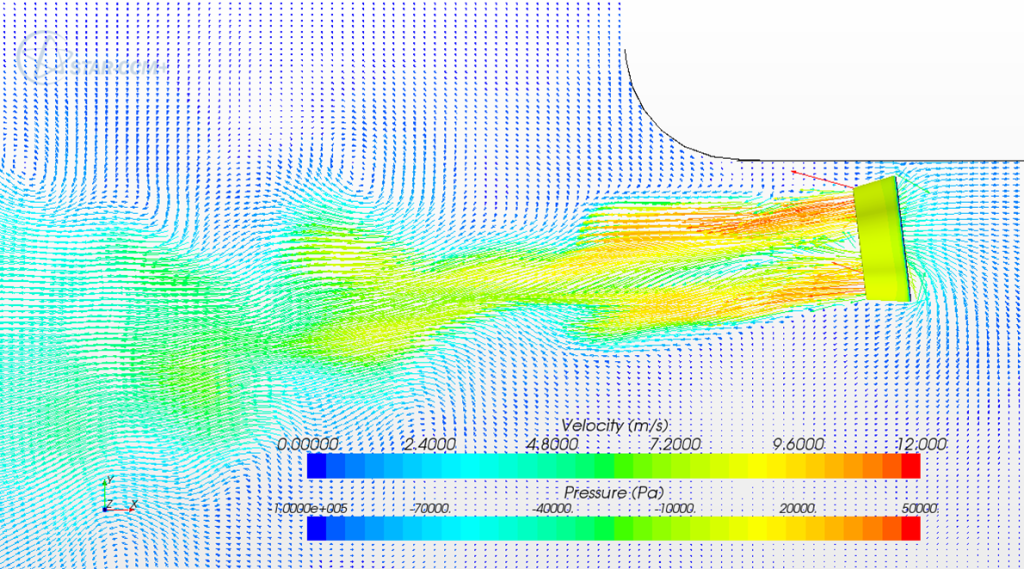 In addition to this, the 7 degree down angle also eliminates interaction between thrusters. The jet stream from any thruster will no longer affect other thrusters when that jet stream is directed toward that other thruster. There are no “forbidden zones” required in the DP program. This substantially improves the station keeping capability of the vessel. Some of the other thruster manufacturers have tried to compensate for the Coanda effect by using their standard 90 degree geared thrusters and tilting the nozzle downward. Tilting of the nozzle creates undesirable side effects, such as very high clearances between propeller blade tips and nozzle in the top and bottom locations, uneven propeller inflow velocities, uneven pressure distribution across propeller and nozzle disc areas, etc. Most importantly, the maximum tilting angle is about 5 degrees, which is insufficient to avoid the Coanda effect, so tilting the nozzle only is ineffective in avoiding the thrust losses described above. For semi-submersible drilling rigs, Thrustmaster thrusters with a 7 degree down angle are much more efficient than any other thrusters.